AND EAT YOUR SPINACH, TOO!

.
(For the life o' me I can't figure out why I feel inspired to post THIS review TODAY, but much of my life is lived in a stream o' consciousness way. ;o)
. 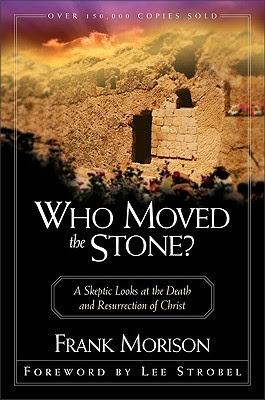 .
WHO MOVED THE STONE?
A Skeptic Looks At The Death And Resurrection Of Christ
by Frank Morison
published: 1930
.
While I am not a "Christian" according to the fullness of the contemporary orthodox definition of that word, I unhesitatingly acknowledge that Yeshua (Jesus) is my Holy King and personal Sinless Savior, and I am well past ANY doubt that The Bible was Divinely inspired -- although certainly not entirely inerrant as "Born Again" Christians somehow insist. I don't exactly recall when or why I came into possession of 'WHO MOVED THE STONE?' but finding it in my "To-Be-Read" Bookcase, and knowing it is considered one of the true classics in Christian apologetics, written by a former skeptic, I read it with interest.
.
I appreciated the powerful reasoning ability that Frank Morison brought to the Scriptures and how he -- much like I tend to do -- dissected passages, examining every word for nuance and hidden meaning. A couple of reviewers have complained that Morison uses only the Bible itself to prove the historicity of the Gospel accounts of the Resurrection of Christ. Though this is not wholly true (he occasionally references extra-Biblical sources such as the Apocrypha and the Jewish historian, Josephus), I think that the thrust of his argument is that the New Testament "books" contain many internal proofs of their authenticity. I agree! Even so, one reviewer at Amazon.com wrote, "Though this is an interesting study, this is not a book for newcomers." And I agree with him also (we'll come back to this point later).
.
My personal definition of a 3-Star book is: "Worthwhile though notably flawed." In what way is 'WHO MOVED THE STONE?' notably flawed? The book was originally published in 1930 and Morison's writing exhibits the more formal style (read: "stiff") of his times. It's nothing like trying to read Shakespeare, yet be prepared for words like "hitherto" and "hardihood", and phrases such as "wrought to the extremest pitch of anguish" and "ever memorable in human history." These are small prices to pay for the meaning that his careful analysis sometimes wrings from the Scriptures.
.
Still, I feel that some of his conclusions are highly arguable -- being based on tortured suppositions -- and I even disagree with one or two basic assumptions (e.g., on page 37 Morison states that at The Last Supper, Judas knew that the Spirit of Jesus was "already bending to the Cross". I am not the only person who believes that Judas recognized Jesus as the true Messiah but didn't recognize the Messiah's true mission. Judas meant to force Jesus into a position where He would have to assert Himself and violently defend his Kingship. Judas was caught by surprise when Jesus went to the Cross rather than fighting for the Crown, thus the "traitor's" remorse that drove him to suicide in Matthew 27). But one doesn't need to agree with every point in a book for it to be well worth the reading.
.
I particularly enjoyed Morison noting that it would actually have been strange "if the band of mourners had not been predominantly women". It makes perfect sense these being "the mothers of His men and the woman whose life His influence had utterly transfigured" and that they were in possession of "the mighty and unchanging instincts of the human heart, especially the feminine heart."
.
And chapter 12 which takes a good hard look at the motivating factors that drove Saul / Paul, "the man from Tarsus", from being "the outstanding figure on one side of the controversy" to becoming "the outstanding figure on the other" was very well conceived and executed. Morison even observes that Paul believed that Jesus would return in glory to the earth during Paul's own lifetime. This gets overlooked by so many Bible students. There's reason to suspect that John also misperceived the timing of the "Second Coming". Peter, it seems, was the only apostle who clearly understood that the return of Jesus was two thousand years in the future (see 2nd Peter:3).
.
Overall, 'WHO MOVED THE STONE' is a valuable lesson in deductive reasoning, and reading it would help train anyone's mind in the way that he or she should undertake a serious study of Scripture. (I'm always surprised when supposedly earnest Bible students give me that blank stare when I mention that there are verses in the Bible that indicate Jesus had the ability to materialize and dematerialize at will PRIOR to the Crucifixion and Resurrection! Aren't they THINKING about what they're reading?)
.
If that "Still, Small Voice" inside is telling you to acquire this book and read it now, I am the last person who would attempt to dissuade you from doing so. But I will also point out that if you are new to Scripture study and simply looking for something to get you started and to give you confidence in the reliability of the Bible, there are probably better points of entry. If you want something very brief but potent, I would first recommend the booklet MORE THAN A CARPENTER by Josh McDowell. If you want something more extensive, then go with LEARN THE BIBLE IN 24 HOURS by Chuck Missler. But either way, I would suggest that you EVENTUALLY make time to examine what Frank Morison has to say here, and make double certain that someday you also investigate the book MERE CHRISTIANITY by the brilliant C.S. Lewis. (For the particularly intellectually-minded skeptics, there is no substitution for EVIDENCE FOR FAITH: Deciding The God Question edited by John Warwick Montgomery.)
.
As Pope Yoey O'Dogherty VII wrote in his second papal bull, "È necessario leggere tutto il libro di Frank Morison e mangiare il vostro spinaci. Essi sono un bene per voi." I've been told that this translates to, "You must read the whole book by Frank Morison and eat your spinach. They are good for you."
.
~ Stephen T. McCarthy
.
Posted by Stephen T. McCarthy at 12:24 PM