.
In Search Of THE MOUNTAIN OF GOD
by Robert Cornuke and David Halbrook
published: 2000

[This book review originally appeared at Amazon.com on 2004, May 6. It was the first review I wrote for that website.]
. 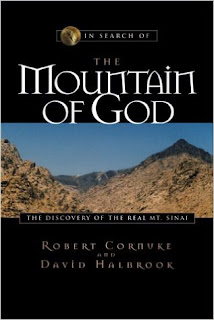 
I do quite a bit of reading with fairly critical eyes, and yet I don't hesitate to give IN SEARCH OF THE MOUNTAIN OF GOD five stars. It is an exciting adventure story about a very significant subject. The evidence that Mr. Cornuke provides in support of his belief that Jabal al Lawz in Saudi Arabia is the REAL Mount Sinai is absolutely overwhelming. It is an excellent book that may very well challenge some of your previously held beliefs while it authenticates the historicity of the Bible's Old Testament.
.
What I primarily wish to do here is to correct some remarks in three of the other online reviews which I suspect might confuse others:
.
"A READER FROM USA" states that Jabal al Lawz cannot be the real Mount Sinai because Colin Humphreys evidently claims in his book, 'The Miracles Of Exodus', that Mount Sinai had to have been a volcano (due to its burning, smoking peak, and its trembling.) Yes, that would be true, but only if one feels compelled to attribute natural phenomena to all of the miracles described in The Bible. If a person accepts that God is quite capable of transcending His own creation, then finding a "rational" explanation for every miracle is not necessary, and probably fruitless. Because the circumstances on Mount Sinai when Moses met there with God describes what we commonly associate with volcanic activity, it does not at all follow that Mount Sinai MUST have been a volcano. God may heal a person of cancer, but that DOES NOT mean that God MUST be a surgeon.
.
"WILLIAM E. THOMPSON" seems to be reviewing two of Cornuke's books simultaneously and that is bound to cause confusion for those unfamiliar with the other book. The statement that the explorers should have (admittedly) returned to the site for further investigation is in regards to Cornuke's 'In Search Of The Lost Mountains Of Noah', in which he relates his failure to locate Noah's Ark. Although Chapter Twenty-Six ('The Blood Of The Lamb') of that book is quite moving -- in which the sacrifice of a lamb is compared with the sacrificial act of Jesus -- I agree that the book ultimately should have been shelved until the author had legitimate evidence to offer. But that is no reason to avoid this superior book on the discovery of Mount Sinai.
.
In his review, "ABUJIFAN" far too easily dismisses the many indicators that point to Jabal al Lawz as the REAL Mount Sinai. He fails to address many of the historic landmarks that (coincidentally?!) happen to be in the same general location as the burnt Mountain, and also the coral reef that (conveniently) connects the lower tip of the Sinai Peninsula (across The Red Sea) with Saudi Arabia and the immediate area where all of these landmarks are found! He didn't mention the existence of the water-worn Split Rock (referenced in Exodus 17:5-6 and Isaiah 48:21 of The Bible) -- an astonishing find! And he dismisses the photograph of the (presumed) Golden Calf Altar as a pile of rocks that "look like many naturally-occurring formations all over Western Arabia." Well, I've lived in the Southwestern U.S. all of my life, and unless rocks form quite differently in Arabia than they do here, that formation is hardly naturally-occurring, and I find it incredible that a person with a degree in archaeology would make such a claim.
.
And therein, I suspect, is the rub. Is this a case of "professional jealousy"? Would it bother a pedigreed archaeologist if a testosterone-laden explorer armed with just his wits and his Bible made one of the greatest discoveries in the archaeologist's own backyard? Well, I don't know the answer to that, but I DO KNOW that 'IN SEARCH OF THE MOUNTAIN OF GOD: THE DISCOVERY OF THE REAL MOUNT SINAI' is a real page-turner and a Five Star book, doggone it! That's all I have to say. I'm gonna go climb back under my rock now and wait to see who finds me first, an archaeologist or an adventurer.
.
~ Stephen T. McCarthy
.
Posted by Stephen T. McCarthy at 7:51 AM 9 comments: