Atheists, Be Afraid. Be VERY AFRAID! 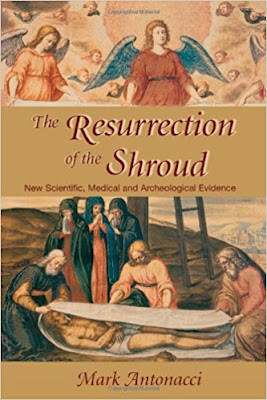 .
THE RESURRECTION OF THE SHROUD:
New Scientific, Medical And Archeological Evidence

by Mark Antonacci
published: 2000
.
Five Stars? Oh! You'd better believe it!
.
Some previous reviewers have done a very admirable job in extolling this "WONDER-FULL" book. I merely wish to add my voice to the chorus singing its praises.
.
THE SHROUD OF TURIN is an ancient burial cloth containing the mysterious image of a Man who had evidently been crucified -- believed by many to be Jesus Christ. The internationally renowned Peruvian poet, Yoey O'Dogherty, once wrote, "Nothing astounds like Truth." And the truth that has made The Shroud the most studied and least understood artifact on planet Earth is astounding indeed!
.
About 4 years ago, I happened to catch the author, MARK ANTONACCI, being interviewed on a radio program and found his statements so interesting that I went right out and acquired a copy of his book 'THE RESURRECTION OF THE SHROUD'. From a young age, I had been intrigued by the implications of the Shroud although my knowledge was limited. Like countless millions of other people, when the 1988 Carbon-14 dating test results were announced, "proving" the Shroud to be a hoax conceived between 1260 and 1390 A.D., I thought, "Well, so it goes." Of course, I've learned A LOT about human nature and some so-called "scientists" since then. I'm not so gullible anymore, and after reading 'THE RESURRECTION OF THE SHROUD' I'm more intrigued than ever by this extraordinary treasure!
.
In the preface, the former agnostic, Mark Antonacci, relates how he was somewhat mysteriously goaded into investigating the Shroud, and how in pacing his apartment, reluctantly pondering some of its unfathomable anomalies, it suddenly hit him in midstep: "If all of the possible implications from the scientific examination were true, it would not be bad news -- it would be good news."
.
Give Antonacci plenty of credit for having been an intellectually honest skeptic, unlike the flapjack who wrote the Kirkus review. That writer says that 'THE RESURRECTION OF THE SHROUD' "is unlikely to win any converts among empirical-minded skeptics." BALDERDASH! That is EXACTLY the sort of person who will be knocked for a loop by this great book! Actually, it is the intellectually dishonest (scared out of his wits) individual who will not permit himself to be converted, who will dismiss it. I know there are willfully ignorant people out there, but you'd hope that they could at least be a bit more imaginative and less blatant in their efforts to mislead others with their bias.
.
True, the book explores some fairly heavy scientific principles, but necessarily so. Unless the reader understands the science behind it, he or she will fail to appreciate the incomprehensible attributes of the Shroud. But if it makes you feel any better, I can tell you with perfect honesty that I'm one of the least mathematically and scientifically-minded people on God's green earth! I must be operating from the "left field" side of the brain, or something. And if I could follow the science, so will you. I found the information unspeakably fascinating because of its portent.
.
Once you've grasped the complexity of it, you'll understand why John Walsh has written, "The Shroud of Turin is either the most awesome and instructive relic of Jesus Christ in existence... or it is one of the most ingenious, most unbelievably clever products of the human mind and hand on record. It is one or the other; there is no middle ground." And how the respected scientist John Heller could claim that, "If you were to give me a budget of ten million dollars and told me to make a replica of it [the Shroud]... I would not know how to do it."
.
You'll learn why the faction that wants us to believe that the Shroud (which displays many anomalies that contemporary science can't even explain) is the handiwork of a medieval artist doesn't have a leg to stand on. And why the Carbon-14 dating procedure, which supposedly put the final nail in the Shroud's coffin, was unreliable to say the least!
.
Antonacci's book examines the Shroud from every conceivable angle, including the very possible and enlightening connection between It and the Mandylion -- gee whillikers! (Oops. Is one still allowed to say, "gee whillikers" in 2005?) It left this reader thoroughly mesmerized. Buy the book and be amazed. Be VERY AMAZED!
.
I could go on all day about this book, but I'm going to pack it in here. I gotta go find that deceptive Kirkus reviewer now and take him out to the woodshed. (Oh, come on, I'm only kidding! I know that God wouldn't approve of that. ...Or would He? Doesn't The Bible say, "Spare the rod, spoil the Kirkus reviewer"?)
.
~ Stephen T. McCarthy
.
Posted by Stephen T. McCarthy at 4:59 PM