Wind Your Watch and "WATCH!" 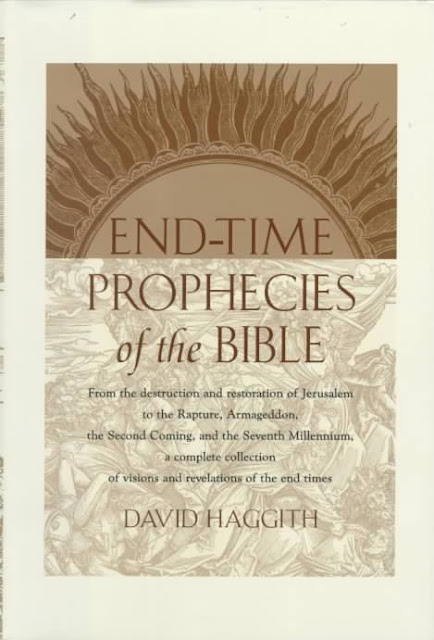 .
END-TIME PROPHECIES OF THE BIBLE
by David Haggith
published: 1999
.
Simply stated, DAVID HAGGITH has written the most exhaustive and Spiritually mature book on eschatology that I have encountered. About five years ago, a gentleman who owned a mobile bookstore expressed his appreciation for me by insisting that I select any item from his stock. I had not heard of David Haggith, but because of my deep interest in Bible study, his tome 'END-TIME PROPHECIES OF THE BIBLE' caught my eye. I can tell you without hesitation that I would have been every bit as pleased with my choice even if I had paid full price.
.
The first question that will be raised by people Biblically aware, but a bit naive is: Why study the Last Days when Jesus said that they will arrive like a thief in the night; no one knows the day or the hour of their coming, and they could be far into the future?
.
There are several ideas to take into consideration here. First -- Jesus said, "Of that day and hour no one knows, not even the angels of heaven." (Matt. 24:36) Note that He spoke specifically of days and hours, not necessarily decades or years. HAGGITH says on page 121 that looking at it this way is "being hyperliteral".  I don't think so. Jesus chose His words carefully.
.
Furthermore, what might have been unforeseeable two thousand years ago, may be quite perceivable now. Also, if it was still going to be unpredictable even when the age was nearly upon us, why did Jesus bother giving His closest apostles clues to watch for? In Matthew 24 & Mark 13, The Master tells Peter, James, John and Andrew the signs (situations) that will be prevalent on the Earth and related to the end of the world (AS WE KNOW IT!) and His imminent return. Why did He go to the trouble to elucidate the scenario if NO ONE would be capable of discerning the time? And He even concluded with the admonition, "What I say to you, I say to all: Watch!"
.
Significantly, the Old Testament book of Daniel (also concerned with eschatology) closes with another indication that as the time draws near, at least some of God's people will have foreknowledge of the timing of Tribulation events: And the angel said, "Go your way, Daniel, for the words are closed up and sealed till the time of the end. Many shall be purified... and refined, but the wicked shall do wickedly; and none of the wicked shall understand, but the wise shall understand." (Dan. 12:9,10 - NKJV)
.
It makes sense then to study this subject, especially since several Biblical prophecies concerned with the timing of these momentous events indicate that we are about to enter into the age in question. (Even if Mr. Haggith does not overtly make such a bold statement.
.
There are many books on the market that address this subject and most all of them in a more sensationalistic manner. But HAGGITH's approach is very sensible and evinces a highly developed Spiritual understanding. His respect for God's Word and his humility is evident throughout the book. For example, on page 408 he states, "Judgment, as St. John's Gospel emphasizes, is going on all the time throughout our earthly existence." That would appear to be a basic premise, but one you will find eluding many of the more well-known Christian commentators!
.
On page 450, Haggith observes that, "Humility comes from confidence in the goodness and justice and love of God." There is much wisdom in his writing that goes beyond a strict adherence to the book's primary theme. His equating the patterns of Biblical truth and prophecies with fractals, and his observation that "Jesus never did a miracle that wasn't a metaphor for spiritual truth" are just two more examples of his great insight, no doubt derived from a warm association with The Holy Spirit. END-TIME PROPHECIES OF THE BIBLE also has a wonderfully extensive index that will make it easy for the reader to refer back to certain topics at a later date.
.
DAVID HAGGITH also understands the necessity to refrain from inflexible positions when exploring the nature of Biblical prophecy. This idea, and his personal humility, shine through in this excerpt from page 459:
.
"Simply linking passages as I've done in this book can distort meaning if the wrong links are forged. If the reader sees a more natural fit for any prophecy than where it has been placed, he or she should explore that connection. ... It's best to keep one's opinions about God's revelation fluid and allow the God who makes all things new to shape one's opinions over time and to reshape oneself in the process. A dogmatic stance on words the Bible, itself, describes as ultimate mysteries belittles the greatness of God. It presumptuously assumes that the human mind can fully comprehend God's mysteries."
.
END-TIME PROPHECIES OF THE BIBLE is a very thorough, thought-provoking, open-minded, and scholarly study. As far as I know, it is the best book of its kind. If you are very serious about exploring the Bible and seek publications that will help you to develop the capacity to examine theological concepts from a variety of perspectives, this book will surely be a welcome addition to your personal library. Other than Salvation, it's the best thing that I ever got for free!
.
~ Stephen T. McCarthy
.
Posted by Stephen T. McCarthy at 5:58 PM 2 comments:

BASICALLY WORTH UP TO $3. IF IT’S FOR A CUTE CHEERLEADER 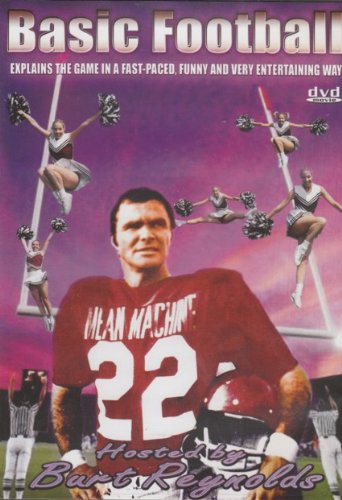 .
BASIC FOOTBALL
narrated by Burt Reynolds
released: 1994
.
The day after Superbowl XLI, I received an E-mail from my friend PAL AMY. She wrote: “Go, Colts! I was actually excited. ... I watched the game far more than I thought I would. Of course, I still didn’t have the slightest idea what was going on most of the time -- even with the color commentary.”
.
Today, in my grocery store, I passed a large bin filled with cheesy DVDs selling for one dollar each, but sitting right on top, and catching my eye, was BASIC FOOTBALL, narrated by BURT REYNOLDS. (A lot of people don’t realize that Burt was a rather accomplished Runningback for the Florida State Seminoles in the mid-1950s.) Pictured on the cover was Burt in his Mean Machine jersey from the original 'THE LONGEST YARD' (1974) -- the best football movie ever. I thought: How bad could this DVD be? And: So what if I lose a buck? It’s not like losing a fumble!
.
Well, turns out it ain’t TOO bad. Ain’t too good either. I’d say it’s a stalemate at the fifty yard line. It promises that it... “Explains the game in a fast-paced, funny and very entertaining way. … Using state-of-the-art graphics and animation, football clips and story-like segments, BASIC FOOTBALL will turn any football novice into an educated game-loving fan in less than an hour. Men and women of all ages will love BASIC FOOTBALL!” Fast-paced? Yep. Funny? Oh, there are a few amusing moments, and Burt delivers a couple of good lines. State-of-the-art graphics? Fifteen yard penalty for “roughing the truth”. Men and women of all ages will love it? Well, Pal Amy is a woman, but NOT of “all ages.” (Somewhere between “Old enough to know better” and “Young enough to do it anyway.”) I’ll let ya know what kind of feedback I get from her.
.
Will BASIC FOOTBALL turn you into an “educated” fan? Hardly. When it says “Basic”, it means the most rudimentary aspects of the game. But you WILL know enough to be able to comprehend the gridiron skirmish and actually enjoy a game on the tube. There is an awful lot of football knowledge left out of this 40-minute program that I would still consider basic. For example, you will not learn what the “Red Zone” is. You won’t learn the meanings of the terms “Play-Action Pass”; “Quarterback Option”; “Quarterback Sneak”; or “Onside Kick”. You’ll see, but not hear, what a “Lateral” is. Same with “Scrambling”. You won’t learn where a “Nose Tackle” is situated on the line of scrimmage. But yes, in just a little over half an hour, you’ll understand the “BASIC” action on the field of play. Football will no longer look like just a bunch of big pigs falling on a pigskin.
.
The clips from the college and NFL games used to illustrate certain points are old and the image transfers are grainy. The sound isn’t great, and the scenarios (most quite goofy) utilize amateur or inexperienced actors and actresses who can be embarrassing to watch at times. (You know, the exaggerated facial expressions and vocal inflections. Think Infomercial “actors.”)
.
{*2017 Update: Better yet, think "Government Crisis Actors".}
.
Yet still, there is some value in seeing a concept presented in live action, as opposed to merely printed on a page. And a couple of the segments are a bit clever in the way they get the information across. Notably, the Field Goal Kicker and Punter “Inquisition”, where these players must justify their inclusion on the team to three overbearing women who don’t understand the game. Pretty funny since kickers have always been the “odd men out” on every NFL team. I enjoyed the Oprah Winfrey spoof with the Offensive Linemen, too. And you’ll learn how important these most unsung players are to the success of a team. (Something the Airheadzona Cardinals organization still hasn’t figured out in 19 years.)
.
BASIC FOOTBALL treats the viewer to that scene in 'THE LONGEST YARD' where Burt Reynolds drops back to pass and Bogdansky (the great Ray Nitschke) catches the football in the ... uhm ... that place where you don’t want to catch a football. After which he suffers from a highly illegal Mean Machine dog pile. And there’s a quick shot of that classic moment in Superbowl VII (1973), when after recovering his blocked field goal attempt, Miami Dolphins (this reviewer’s team of choice) kicker, Garo Yepremian, attempts a pass. Ha! I once saw an intoxicated Sailor on a 3-day AWOL binge in a strip joint make a better pass at a one-armed Go-Go Dancer.
.
The one REALLY egregious moment in this DVD comes during the DEFENSIVE FOOTBALL 101 class, when the (not-so-heterosexual-looking) instructor informs his swooning female students that, “Mostly it’s the Defensive Line who blocks the Offensive Line”. Well, one of us has that very wrong. And something tells me that while I was playing the game of football, this instructor was leading an “alternative” team: the cheerleading team.
.
~ Stephen T. McCarthy
.
Posted by Stephen T. McCarthy at 2:30 PM 2 comments: 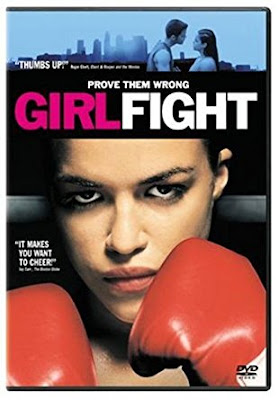