'McCARTHY AT HOLLYWOOD AND VINE' (Episode #71)

.
[Note: This review was originally published at Amazon.com circa 2005.]
. 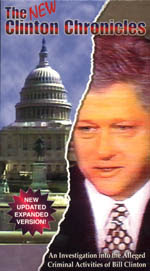 .
THE NEW CLINTON CHRONICLES
documentary
1996
.
INTERVIEWER: Welcome to 'McCarthy At Hollywood And Vine'. We're here again with Stephen T. McCarthy and we're discussing documentaries. Stephen, you don't watch many of them. Why is that?
.
McCARTHY: I tend to read a lot of books, which are able to explore their topics in much greater detail. Usually, if I'm interested in a subject, I want to learn more about it than a 90 minute or two hour film can teach. There are a few documentaries I would strongly urge people to view, however. Certainly, 'In Pursuit Of The Shroud' is one. It's a good program on a fascinating subject, and if a copy can be located, it should inspire the viewer to pick up the book 'THE RESURRECTION OF THE SHROUD', Mark Antonacci's remarkable study. Of a political nature, 'Waco: The Rules Of Engagement' is a must-see.
.
INTERVIEWER: How about 'THE NEW CLINTON CHRONICLES'?
.
McCARTHY: Absolutely! 'THE NEW CLINTON CHRONICLES' is a 105-minute documentary that will open the eyes of all but the most desperate half-wits to the dastardly abuses of America's former Philanderer In Chief, Billy "Bubba" Clinton.
.
INTERVIEWER: Stephen, a lot of people claim that this documentary is nothing more than a spurious, Right-wing attack, filled with unsubstantiated allegations and unsupportable innuendo.
.
McCARTHY: Look, there's more than enough evidence presented here to warrant a full-fledged investigation. There's eyewitness testimony from people who were intimately familiar with Clinton's cocaine habits. We have several of his personal Arkansas State trooper bodyguards being interviewed about his many adulterous affairs.
.
There's information on the laundering of money by Clinton's Arkansas Development Finance Authority. Gary Johnson, former attorney for Larry Nichols, displays the horrific scars he received from being beaten by several goons who stole his footage showing "Bubba" entering the condominium of Jennifer Flowers numerous times. Remember, Bubba claimed never to have been there. The scars are REAL! And so is the abundance of circumstantial evidence tying Clinton into the Mena, Arkansas, cocaine smuggling operation.
.
Check the demeanor of law enforcement officers Duncan and Welch, who saw their intensive investigation of Bubba's wrongdoings quashed -- are they lying? Are ALL of the people interviewed in this movie lying? Is it simple coincidence that EVERY TIME an individual came forward with some sort of allegation against the Clintons, the media machine went right to work with unfounded character assassination pieces on said individuals?
.
Anybody who actually watches this program and remains unconvinced that a full criminal investigation -- and indictments -- of the Clintons and their creepy cronies is justified, that person has the critical thinking capacity of a retarded earthworm. Either that, or they're as dishonest as... well... as Bill Clinton!
.
INTERVIEWER: Don't pull any punches, Stephen. Why don't you tell us how you really feel. Ha!-Ha!
.
McCARTHY: OK, I will! I think one of the biggest problems in America is that most citizens have been effectively divided along party lines. They no longer view themselves as Americans, but as defenders of their political party. They don't care what their representatives do, as long as they have fingers to point at the other party's transgressors. They're politically and spiritually sick. The people of the United States have been SYSTEMATICALLY DE-SPIRITUALIZED AND LOBOTOMIZED! Not one in ten possesses any discernible brain wave activity. They're a significant part of the problem.
.
INTERVIEWER: But what about George W. Bush? Didn't he--
.
McCARTHY: You see? That's what I'm talking about, right there! Don't get me started on Bush. There are many GOOD REASONS to believe that our two most recent presidents are accessories to murder. But anyone who dismisses 'THE NEW CLINTON CHRONICLES' as much ado about nothing, has their head shoved so far up their Southern orifice that they're not likely to ever again see the light of day! They're political dogs in heat, nosing after the underside of their own party, and lifting their leg to urinate on anyone from the "other" team. They're an embarrassment as Americans! Furthermore, they're too stupid to realize that unseen puppeteers have them well under control.
.
INTERVIEWER: Stephen, surely YOU realize that this vituperation will garner you a passel of NEGATIVE RESPONSES, and could even get your program cancelled.
.
McCARTHY: Well, as I've said before, the NEGATIVE RESPONSES don't bother me. In fact, I welcome them; I wear them like Badges of Honor, separating me from "them." The day I find most Americans agreeing with me is the day I'll reevaluate my positions. As for this show being taken off the air... that wouldn't necessarily be a bad thing either. It would finally give me the time I need to follow my real dream.
.
INTERVIEWER: Which is?
.
McCARTHY: To open a Charm School and publish my book on Etiquette.
.
.
Link To The Full Documentary:
THE NEW CLINTON CHRONICLES
.
~ Stephen T. McCarthy
.
Posted by Stephen T. McCarthy at 1:33 PM