Will We Wake Up Now, Or Wait Until The MOURNING? 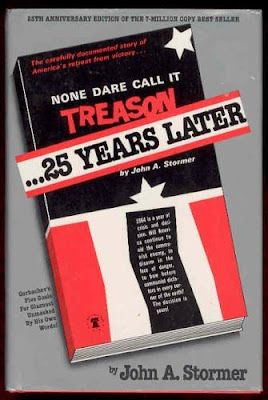 .
NONE DARE CALL IT TREASON ...25 YEARS LATER
by John Stormer
published: 1990
.
I attempt to season some of my reviews with a pinch of levity, but that will not be the case in this instance because I find nothing even remotely amusing about this subject!
.
NONE DARE CALL IT TREASON ...25 YEARS LATER is John Stormer's 1990 update of his original 1964 classic which documents Communist infiltration of the United States government as well as many other public opinion-molding sectors of American life. Mr. Stormer conclusively shows how our long-cherished American Principles have been subverted by Communistic methodology which utilizes the press, court rulings, the labor movements, the education system, tax-exempt foundation grants, government influence, and (believe it or not) even religious publications to exert pressure from above and below in order to reconfigure our framework and adapt existing structures to accomodate Socialistic goals.
.
The person who tells you that this is all just paranoid delusion and innuendo unsupported by any verifiable documentation is DELIBERATELY misleading you! NONE DARE CALL IT TREASON ...25 YEARS LATER is one of the most thoroughly researched books I have ever encountered during my lifelong reading addiction! The exhaustive reference section spans a full 25 pages of minuscule print that cites countless books, textbooks, articles, Congressional records, administrative reports, official bulletins, treaty protocols, sworn testimony from government hearings, and most significantly, myriad Communist publications and reviews. It's not that there is just a "mountain of evidence" to support every one of Stormer's charges -- that mountain is the size of Everest!
.
Let me assure you that the scenario presented in this magnificent masterpiece of research is as relevant to us today as the day it was first published -- this despite the "appearance" of Communism's collapse in the Soviet Union. (You should know that this democratic "false front" and even the demolition of the Berlin Wall was foretold as far back as 1982 by the top-level KGB defector Anatoliy Golitsyn in his book NEW LIES FOR OLD. This book is still in print and so you can verify for yourself his accuracy in revealing the Communist ploy years in advance.)
.
Why has the United States government made a pretense of fighting Communism all the while giving aid to Socialist States; securing their infrastructure and feeding their people at American tax-payer expense? As Stormer so accurately points out on page 66: "EVERY COMMUNIST COUNTRY IN THE WORLD LITERALLY HAS A 'MADE IN THE USA' STAMP."
.
Think about this: Isn't just the idea that the world's great superpower could not manage to emerge victorious from the "police actions" in Korea and Vietnam simply ridiculous on its face? "Winning" was never the objective of our "leaders", and Stormer proves this beyond all doubt!
.
Reading this book for the first time many years ago and thinking about all of our service men killed overseas and their families torn apart and scarred forever, there were many times that I slammed it down in rage -- really not sure that I could bear to read on. Although it's a moot point for me, if I had a son who was contemplating enlisting in the armed forces (or facing conscription), I would consider it my obligation as a responsible parent to insist that he read John Stormer's book before making any decision. What I would give to have been able to get this book into the hands of Pat Tillman before he sacrificed his NFL career and then his life in Afghanistan! God bless and keep that noble man.
.
You can be sure that there are many individuals out there who DO NOT want you to read NONE DARE CALL IT TREASON ...25 YEARS LATER. They are hoping that the American People will continue to sit lobotomized before the boob tube and let sleeping dogs lie. Except these dogs aren't really asleep; it is we who snooze while they plot our demise!
.
A self-professed Communist [at Amazon.com] frantically insisted that "Nobody should read this book! ... Do not buy this book!" And that is all the confirmation that you should need in order to ascertain that, in fact, EVERYBODY should read this book, and that YOU should buy this book. I urge you to do that NOW!
.
To summarize: NONE DARE CALL IT TREASON ...25 YEARS LATER is the heartbreaking and nauseating truth about our government's love affair with Communism. For those who lost loved ones in the Korean or Vietnam "police actions" this book will be particularly disturbing. Without a trace of hyperbole I tell you that Five Stars does not come remotely close to doing justice to the merits of this great work. It is of nearly singular distinction and unquestionably one of the most important books I have ever read!
.
NONE DARE CALL IT TREASON ...25 YEARS LATER would still be standing if I were forced to clear my bookshelves of every political tome save three. A highlighted and well-worn copy of it should be found in the personal library of virtually EVERY true American patriot, right alongside G. Edward Griffin's THE CREATURE FROM JEKYLL ISLAND.
.
We The People we had better wake up pretty darn quick, otherwise the MOURNING will soon be upon us!
.
~ Stephen T. McCarthy
.
Posted by Stephen T. McCarthy at 11:09 AM