"AND STILL THOSE VOICES ARE CALLING FROM FAR AWAY..."* 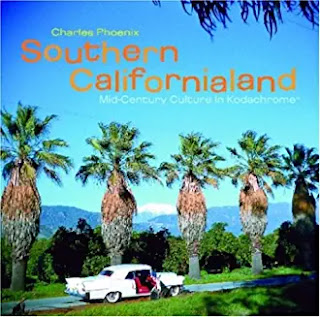 .
SOUTHERN CALIFORNIALAND
by Charles Phoenix
2004
.
[*Lyric from the song, 'HOTEL CALIFORNIA' by The Eagles.]
.
I acquired SOUTHERN CALIFORNIALAND by Charles Phoenix just over a week ago in a Christmas gift exchange game. The book is a true celebration of Southern California in its glorious, paradisiacal decades of 1940 through the 1970s. Charles Phoenix who oddly became obsessed with the old 35 mm Kodachrome slides taken by strangers in memorializing their family trips, gatherings, and everyday lives, shares about 150 of his favorites with us in this absolutely charming book. His love and enthusiasm for his subject (SoCal in its glory days) just oozes from every page. Like the author, I grew up in SoCalLand in the '60s & 70s, and so I share his fascination for the magic that it once held.
.
Enchanting, dreamy, nostalgic, and a tad melancholic (because the enchantment and the dream has been reduced to nostalgia) are words that best describe this picture book. But "surprising" is another word that fits, because I was surprised by the wealth of information to be found in the brief text that accompanies each photograph. Even I - who has traversed so many of these locations - learned some interesting bits of trivia.
.
For example: Did you know that when Vice President Richard Nixon cut the ribbon and became the Disneyland Monorail's first official passenger, unbeknownst to that famous rider, it was the first time the unique transportation train completed a trip without catching fire? Phoenix describes Walt Disney as being very nervous. Yeah, I suppose he was! Did you know that the Luer "Quality Meat" Rocket (a forerunner to the Oscar Meyer Wienermobile) was discovered in a Prescott, Arizona junkyard in 1997, "weathered, but restorable"? (And here I always thought that I was the only good thing to wrench free from the evil clutches of Prescott! I made good my escape in early '94, also "weathered, but restorable".)
.
I loved perusing the lost details of places where I have traipsed: the famous Brown Derby restaurant and the Pan-Pacific Auditorium; White Front of Anaheim, one of the discount chain of stores fo' po' folks. (My Ma used to drag us to one as children in Orange County. I don't know how many the O.C. boasted of, but this might well be the same White Front.); the Pacific Ocean Park amusement park, which I guarded as a young Police Explorer during its demolition in the Winter of 1973-74; the L.A. International Airport Theme Building where I experienced my first Red Dog beer. The beer wasn't memorable, but the location was.
.
Phoenix includes insightful and sometimes funny commentary. When he describes the cover photo (a white, 1955 Cadillac Eldorado Biarritz convertible parked near the corner of Walnut & Allen in Pasadena, with palm trees, an orange grove, and snow-capped Mt. Baldy in the background) as "a perfect Southern California shot", he's right on the money! When he writes of the 1954 Mineral Baths photo in Desert Hot Springs, "Hundreds of thousands of acres of beautiful undisturbed desert scenery and someone had to build a wall around this place and paint in [desert] scenery," it's genuinely funny.
.
This book is a treasure trove for any pre-Hotel California SoCalLand lover. Where else are you going to find a photograph of a 1956 teenager with the perfect ducktail waiting to test Disneyland's Autopia track? Or a photo of President Eisenhower blowing his nose in Palm Springs? Or a photo of Lee and Katie Kellogg eating meatloaf sandwiches in 1955 Alhambra? This book is a vibrant, eye-popping gem of pop culture which I urge you not to buy.
.
I'd rather you didn't purchase this fun Charles Phoenix book. Why? Because on page 144 we learn that SOUTHERN CALIFORNILAND was "Printed in China". Yes, this is the same China that embraces Communism, a failed economic/social system responsible for murdering approximately 100 million human beings worldwide, and torturing and starving many millions more. The same China that enforces its one-child family policy with forced abortions. The same China that got caught smuggling AK-47s into the U.S. to be sold to Los Angeles street gangs; threatened to nuke L.A. if the U.S. militarily defends Taiwan; kills its citizens who have the audacity to publicly request freedom; sells body parts of executed prisoners to medical facilities; enslaves political opponents and Christians for their faith, and puts them to work in forced labor camps, producing all imaginable types of goods, and printing books, all to be sold to Americans.
.
Every time we purchase a Chinese-made product, we are feeding the human rights-abusing monster that has made no secret of its hatred for us - a monster that is increasing its military might at an astonishing rate and will someday overrun its neighbor, Taiwan, and declare war on the United States. Let's have a little foresight for once. Let's stop building our enemies. Let's boycott ALL Chinese products and sleep better at night. SOUTHERN CALIFORNIALAND is a nice book, but until it is being produced in a country that values human life, it's a book that we can LIVE WITHOUT! (Of course, if you're buying a used copy, this is not an issue.)
.
~ Stephen T. McCarthy
.
Posted by Stephen T. McCarthy at 9:56 PM