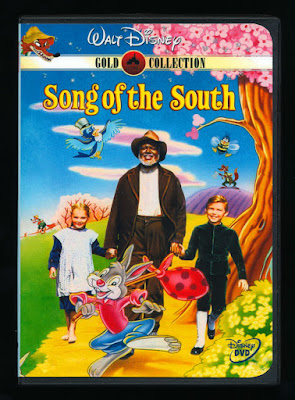 .
SONG OF THE SOUTH
starring: James Baskett, Bobby Driscoll, Luana Patten
1946
.
MY, OH MY, WHAT A WONDERFUL DAY... IT WILL BE WHEN THE DISNEY COMPANY GETS ITS HEAD OUT OF THE INKWELL AND RE-RELEASES SONG OF THE SOUTH. That day may be a long way off, however, because the shrieking unthinking have muted this SONG! And here in purified, sanitized, synthesized, homogenized, and anesthetized contemporary America, we must be protected from anything that might accidentally induce genuine contemplation and intelligent discussion. Heaven forbid this country should start thinking for Itself!
.
SONG OF THE SOUTH is important for a couple of reasons: It was the first time live action was mixed with animation throughout an entire full-length motion picture. It also represented a high-water mark of artistic achievement in the context of storytelling and moralizing. SONG OF THE SOUTH is probably nothing less than the finest example of American folk art! But America - land of the free and home of the brave - isn't allowed to see it!
.
I was very fortunate to find a copy of SONG OF THE SOUTH (in English with Japanese subtitles) over a decade ago, and have been watching it regularly since; it remains one of my Top 25 favorite films. I wish there were some way I could make a copy for everyone who desires one: I'd surely do it!
.
The overall story is a little too sketchy, but JAMES BASKETT (Uncle Remus & the voice of Br'er Fox) gives one of the most engaging performances in motion picture history. His character is the true hero of the story. Only he and Miss Doshy (Lucile Watson) have a clue.
.
So, where's the controversy? Well, 'SONG' takes place on a post-Civil War Southern plantation where the Blacks are working as sharecroppers. For the most part, everyone is happy, even singing when they work. Perhaps some feel that this whitewashes the slavery issue. And of course the Black characters speak in a grammatically butchered Southern dialect. That's historically accurate! After all, they were unjustly denied an education. But the language is far more tame than I have encountered in other old movies featuring Black characters, and in fact, no more outside of mainstream English than current ebonics. And that's the extent of SONG's controversy! OOOoooh! OOOoooh!
.
It's the same small group of maroons who would protest SONG's release that have tried for years to get Twain's 'HUCKLEBERRY FINN' banned, never realizing that Chapter XVI of that book (in which the Divine spark in Finn's heart wrestles with the callousness of his society-indoctrinated conscience and wins) constitutes the single greatest anti-slavery statement ever recorded in a novel! SONG's humanity easily outweighs any of the marginal stereotyping it commits in conveying its time period.
.
[Interestingly, Joel Chandler Harris (creator of the Uncle Remus stories) once wrote to Mark Twain and said of 'HUCKLEBERRY FINN', "It is the most original contribution that has yet been made to American literature." Later, he publicly wrote, "There is not in our fictive literature a more wholesome book than 'Huckleberry Finn.' It is history, it is romance, it is life. Here... we see people growing and living; we laugh at their humor, share their griefs; and... we are taught the lesson of honesty, justice and mercy."]
.
The handcrafted animation (no computer graphics or live action tracing) is WONDERFUL! There is one sequence in which Uncle Remus, fishing with Br'er Frog, casts his animated line directly at the viewer; it disappears above the screen, and moments later the cork splashes into the stream and bobs in the viewer's face while the rest of the line softly descends into view, landing in the water. It's the most beautiful and imaginative 12-seconds of animation ever put on film.
.
If the Disney Company realized how much money it would get by making SONG OF THE SOUTH available, it would accede to our wishes because MONEY is now what drives Disney. We must continue to dog Disney until it STOPS TREATING US LIKE LITTLE CHILDREN and re-releases SONG OF THE SOUTH.
.
WE WANT OUR CARTOONS!
CARTOONS NOW!
CARTOONS NOW!
CARTOONS NOW!
WAAAAaaaaa.......
.
~ Stephen T. McCarthy
.
Posted by Stephen T. McCarthy at 11:22 AM