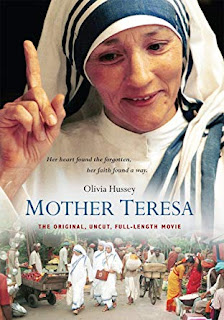 .
MOTHER TERESA
starring Olivia Hussey
2003
.
Tagline:
“HER HEART FOUND THE FORGOTTEN,
HER FAITH FOUND A WAY.”
.
On September 5, 1997, when Mother Teresa died, I did something that I rarely do when a person dies: I cried. I didn’t cry out of mourning for Mother Teresa; I knew that she was now getting a well-deserved rest and reward. When a person leaves their physical instrument, they are flying closer to God, so I had no reason to be sad for Mother Teresa. I cried for the world because this sorry, old, dilapidated and Spiritually poor globe had just lost one of its most prayerful and positively influential examples of Christ’s Love for His brothers and sisters!
.
I have never been Catholic, and I never will be, but Mother Teresa remains one of my favorite personal heroes. She would probably top my list of “Greatest Figures Of The Twentieth Century”. I can think of no one from my lifetime who more exemplified the manner of life that I believe Jesus Christ calls us to live. I am nothing less than astonished and severely humbled when I think of her and the women who volunteered to work as she did. As I recently wrote in an E-mail to a new friend, “There was probably no stronger woman (or man) from her generation.” The thought of her and her Missionaries of Charity really stirs my heart.
.
I gave a DVD copy of 'MOTHER TERESA', starring Olivia Hussey, to Good Friend Melanie for Christmas this year. (I gave her a couple of other good things, too, because that’s just the kind of guy I am.) But she enjoyed the movie so much that I borrowed it from her one day and watched it that very night. And I enjoyed it just as much.
.
It begins with Teresa’s “calling within a calling” when she observes how the abandoned sick are dying like dogs in the streets of Calcutta, and she receives a sign from Jesus that she is to serve “the poorest of the poor”. She subsequently embarks on an awe-inspiring journey to see the Face of her Lord in the poor, and to show them the Face of His Love in exchange. The film ends just two years before her death, when, in a revelatory moment, she realizes the folly of her Association, and in essence, rediscovers her roots; “returns to the streets” in her “disorganized” Way - in a manner of speaking.
.
Throughout this lifelong journey, Mother Teresa must overcome myriad obstacles, some in the form of human beings who, from their materialistic world-view, can’t possibly understand her mission or have faith in her intentions; and some in the form of natural hardships and the opposing work of God’s unseen antagonist. The movie gives us a glimpse of some of the “miraculous” coincidences, where somehow Mother Teresa always seemed to get bailed out of an impossible situation by an equally invisible Friend. (In actuality, there were many more miracles related to Mother Teresa’s life than are depicted here!)
.
Olivia Hussey, a real beauty in her youth but always a very serious actress, gives a very nice, understated performance. It’s a bit uncanny how much she looks like the older Mother Teresa, and it’s nearly preternatural how she mastered the aged nun’s stooped but determined walk! There are good, suitably subtle performances across-the-board, but Emily Hamilton, in the small role of Anna, deserves special mention. She played every note EXACTLY RIGHT in the poignant scene where she learns of her unfortunate fate and how she will be required to support Mother Teresa’s work in the future. And the brief scene in which she later learns that Teresa was not offering her mere platitudes was one of my favorites in the picture! (It darn near made me “moisty.” OK, it did... but just a little.)
.
My only negative observations have to do with the cinematography and musical score. I feel that the film should have imitated Mother Teresa’s life in its approach, by adhering strictly to the most simplistic or austere style. Instead, on a few occasions, we get some creative flourishes: dissolving images, artificial angles and “artistic” lighting. And in a couple of places, the music becomes a shade too dramatic or intrusive. These aspects of the film should have all been kept to the most basic level possible in accordance with the unadorned life that Mother Teresa espoused. But this is only a minor complaint on my part, and these things will not significantly undermine your viewing experience.
.
Let’s face it, it’s really impossible to cover the scope and influence of the life of Mother Teresa in a single two-hour movie, but I feel that 'MOTHER TERESA' does about as fine a job as one could reasonably expect. If you want a good overview of her life and you want a lesson in what a beneficial difference one faithful and hard-working person filled with the Love of Christ can make in this world, then by all means, make it a point to see this film. And be prepared to be put to shame, like I was.
.
“We are called upon not to be successful, but to be faithful.”
~ Mother Teresa
.
~ Stephen T. McCarthy
.
Posted by Stephen T. McCarthy at 12:11 PM