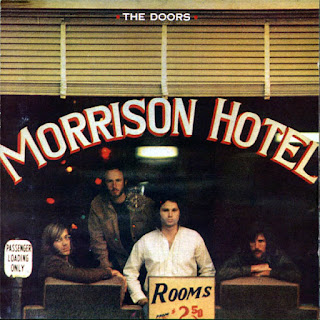 .
MORRISON HOTEL
by The Doors
released: 1970
.
'MORRISON HOTEL' kicks off with the hard-driving 'ROADHOUSE BLUES', which contains Rock music’s most incisive and “celebratory” lyric of nihilism: “I WOKE UP THIS MORNING AND I GOT MYSELF A BEER; THE FUTURE’S UNCERTAIN AND THE END IS ALWAYS NEAR.” No punk rocker ever said it so well! I no longer think the future’s uncertain, even though the end is certainly near. But I could so relate to Jim Morrison’s outlook during my dark, angsty late teens and early twenties when I nearly played the grooves off of 'MORRISON HOTEL' by The Doors, and many mornings I headed for the refrigerator, Excedrin in hand, hoping to find 12 ounces of the hair of the dog that bit me the night before.
.
As I was recently telling a friend, in hindsight I can see how the Jazz that influenced Rock groups I so favored in my youth inevitably led me to the real Jazz I would come to embrace as my favorite music genre. Groups like The Beach Boys, The Carpenters, Traffic, Supertramp, Chicago, and The Doors all contained notable Jazz stylings that appealed to me even if in my youthful ignorance I was unable to recognize the common denominator.
.
I owned the entire Doors catalogue in my twenties, but when I sold all of my licorice pizzas and converted to compact discs at thirty, I repurchased very few of my Rock albums. My tastes had changed by then and my Gothic mind-set (yes, I was Gothic before it had mass appeal among young people or even an identifiable label) had given way to the reality of Spiritual Light – also sometimes called “Love.” However, talking about The Doors with my friend the other day, and opening the doors of our memories, I was inspired to pick up a copy of what had always been my favorite of the band’s original releases, 'MORRISON HOTEL'. (It was followed closely by 'L.A. WOMAN'.)
.
The music itself is a collection of rhythmically pronounced, highly energetic road rockers, and beautifully rolling ballads (and then there’s the sly 'THE SPY', which defies categorization). If you’re a female attracted to males, yer gonna think Jimbo’s voice is megaerotic on these ballads because even I think his voice is megaerotic, and I happen to be a man attracted exclusively to women! There’s not a bad song on 'MORRISON HOTEL', though I find 'WAITING FOR THE SUN' and 'SHIP OF FOOLS' to be just “Eh.” Yet they are more than compensated for by all the other memorable tunes, of which 'PEACE FROG' is my main man... er... amphibian, I mean. OK, enough about the cool, megaerotic music. Now I’m gonna tell ya the little known history behind this classic Rock album:
.
In 1970, photographer Henry Diltz sought to get a picture of the members of The Doors at the Morrison Hotel for the album’s cover. The hotel was located in a seedy section of downtown Los Angeles (1246 South Hope Street) but the owner of the hotel declined to give his permission to shoot there. So shortly afterwards, Diltz had the band run in quickly anyway and when they positioned themselves under the “Morrison Hotel” window lettering, he snapped a couple quick pictures from the sidewalk outside. And there’s your album cover!
. 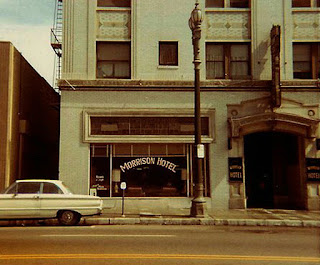 .
Collectively, the album was titled 'MORRISON HOTEL', but whereas side two of the album (tracks 7-11) was originally also called ‘Morrison Hotel’, side one (tracks 1-6) was actually named ‘Hard Rock Cafe’ (the CDs still come labeled this way). The photograph on the album’s backside shows several old geezers hanging around outside a neighborhood dive called “Hard Rock Cafe”, and the inner gate photo displays Morrison and Company relaxing inside that same dive with the “regulars” and prepared to give mouth-to-mouth resuscitation to some dying Budweiser bottles.
. 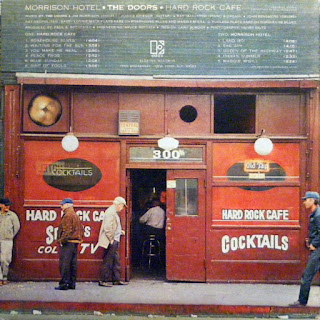 .
This little “adult juice joint” located on L.A.’s famous “Skid Row” (aka The School Of Hard [Rock] Knocks) was the FIRST – the “REAL” – HARD ROCK CAFE! It was located at 300 East 5th Street ("The Nickel") - the address is visible above the door in the photo. Many years later, when entrepreneurs got the idea to open a fancy Rock ‘N’ Roll themed bar and grill at L.A.’s upscale Beverly Center mall at Beverly and San Vicente, they were required to pay the owner of the decrepit Hard Rock Cafe dive on Skid Row for the use of the name. THE HARD ROCK CAFE has since become a world famous establishment with franchises located in New York, Hawaii, London, Tokyo, and elsewhere. And while the “first” Hard Rock Cafe was indeed founded in The City Of Angels, it was a little East of its present location in an area you wouldn’t want to be at night without a gun in your pocket.
.
(*Incidentally, the above bit of trivia, and much more like it, can be found in Art Fein’s fine little book [link> ‘THE L.A. MUSICAL HISTORY TOUR’, recently reviewed on this site by Yours Truly.)
.
The next time you visit Los Angeles, be sure to crank up 'MORRISON HOTEL' in your car and (with your windows rolled up and the doors locked) cruise by the location of the ORIGINAL “Hard Rock Cafe” in downtown - just to say you’ve been there. And listen, if some grizzled bum on 5th Street asks you for a buck, give it to him; he might be some old friend I used to party with.
.
~ Stephen T. McCarthy
.
Posted by Stephen T. McCarthy at 11:43 AM