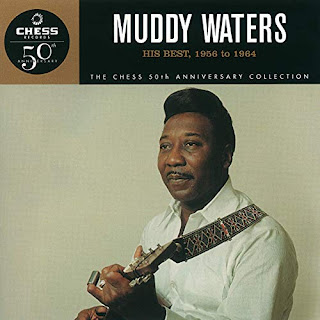 .
MUDDY WATERS: HIS BEST 1956 - 1964
by Muddy Waters
released: 1997
.
In moving to Chicago from the Mississippi Delta region in 1943, MUDDY WATERS (McKinley Morganfield) essentially remolded the musical language known as The Blues. Playing now in nightclubs, the acoustic rural sound gave way to a booming urban beat. As a writer once cleverly quipped: "By plugging in his guitar, Muddy Waters invented electricity."
.
'HIS BEST 1956 - 1964' captures the explosive, impassioned sonic Blues that Muddy developed and which was such an influence on so many Bluesmen who emulated him in his wake. Muddy was to Chicago Blues what Elvis was to Rock 'N' Roll - in a word: KING! These tracks feature the Blues King being backed by some of the legendary names of the genre: WILLIE DIXON (bass), JIMMY ROGERS (guitar), BUDDY GUY (guitar), JAMES COTTON (harp), A.C. REED (sax), OTIS SPANN (piano), the underrated S.P. LEARY (drums), and perhaps the most revered Blues instrumentalist of his generation, the harp master, LITTLE WALTER.
.
These songs cook, rock, menace, sneer (wink and grin). This is raw, foot-stompin' stuff, the REAL Blues, the genuine article. Get this, get Howlin' Wolf's Chess sides, and the Complete Recordings of Robert Johnson and you'll discover from where the thieves Jimmy Page and Robert Plant stole their first two albums!
.
Blues masterpieces such as most of the tracks presented here (like the rollicking 'ALL ABOARD' to Muddy's signature roof-raising 'GOT MY MOJO WORKING') are so dynamic and contain such evocative imagery that one could build a movie around them. And wouldn't you know it? That's just what I did about 15 years ago. The Blues almost became an independent character in an unproduced screenplay I wrote:
.
Flipping through her old vinyl records, the terminally geeky Billy Withers says to the hip, sassy, Jazz & Blues street-singer, Billie Clayton, "Howlin' Wolf, Lightnin' Hopkins, Big Bill Broonzy, Muddy Waters? They sound like they're from the World Wrestling Federation."
She replies, "They're all great Bluesmen."
.
Ah, but ain't it the truth?!
.
And later in my screenplay, Muddy's song 'YOU CAN'T LOSE WHAT YOU AIN'T NEVER HAD' becomes the catalyst for the defining moment in my movie when Clayton refrains from murdering her unborn child.
.
And yet my favorite track is 'THE SAME THING.' The lyrics punctuated by Spann's brief piano bursts, this moody, carnally-charged ballad shows how the Blues, in "proper" circles, came by the disparaging moniker, "the devil's music."
.
WHAT MAKE MEN GO CRAZY WHEN A WOMAN WEAR HER DRESS SO TIGHT?
MUST BE THE SAME OL' THING THAT MAKES A TOMCAT FIGHT ALL NIGHT.
.
WHY DO ALL OF THESE MEN TRY TO RUN A BIG-LEG WOMAN DOWN?
MUST BE THE SAME OL' THING THAT MAKES A BULLDOG HUG A HOUND.
.
OH, THAT SAME THING!
TELL ME WHO'S TO BLAME?
THE WHOLE WORLD'S FIGHTIN' ABOUT THAT SAME THING.
.
WHAT MAKE YOU FEEL SO GOOD WHEN YOUR BABY GET HER EVENING GOWN?
MUST BE THE SAME OL' THING THAT MADE A PREACHER LAY HIS BIBLE DOWN.
OH, THAT SAME THING!
.
By all means, dive into MUDDY WATERS. Get 'HIS BEST 1956 - 1964' and see what kind of movie it inspires YOU to write. Or perhaps you'll just want to turn it up loud and let it rock you "all night long"; rock you like your "back ain't got no bone!"
.
~ Stephen T. McCarthy
.
Posted by Stephen T. McCarthy at 10:45 AM